Thoughts from the Panel during the 28thEconomic Forum, Krynica-Zdroj, Polonia:
Flexible Employment: A way to a global chaos or to a new model of labour market stability?

a brief note, while already on the way back to Munich …

And the changed title is:

Panem et circenses – but who bakes the bread?

There is no reason to carry owls to Athens – they are there, and at least also one is in Krynica, in the park 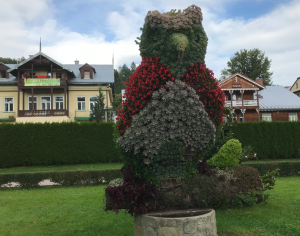 – repeating what is well known, e.g. speaking about growth and employment and looking for ways for its enhancement. Opposing is often naively just about rejecting it without thinking about viable alternatives. The core of my contribution in Krynica can be summarised in the following table and a short para, trying to get a bit closer to the ground of things:

and in the one paragraph:

Precarity can only be meaningfully looked at, if understood as one of two sides of the accumulation regime: there we are dealing with employment issues, around generating value; and we are dealing with accumulation as realising value by combining factors of production and by recombining in different ways use value and exchange value. The one is a matter of production, the other of distribution and exchange. The problematique emanates from the fact of what we may call a “realisation paradox”: Though the market is needed to make surplus real, it is only the productive sphere that makes it possible. The outcome is the “destruction of time“ in the sphere of production, in order to be artificially extended in the sphere of consumption. It should not surprise if one feels reminded of the process of production which consumes raw material, i.e. destroys nature in order to establish artificial consumables.

– I would not suggest that capital/capital accumulation is in a more precarious situation than employment/the employment regime and social securitisation; however, there is good reason to look at (parts of) this under the heading “sex, drugs and crime”.

On the new title: such an event has something of exactly the Panem et Circenses, trying to make us forget that somebody has to bake the bread ….
Follow the link for the recording of some schort remarks.