It had not been just the young Werther plagued by sorrows, and among the many concerned are academics – some old, some young; some knowing, some innocent; some forced and some voluntarily … . 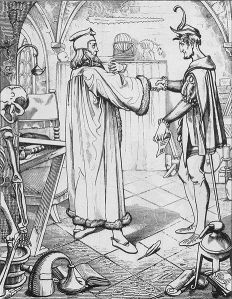 All this is by no means new, the fine-tuning changed while the symphony itself is still the old lyre …

Career settings – career is a nice word actually: ‘a person really made a career’, we say it is somebody reached ‘high ranks’, and to get to the heights one has to make a career, i.e. move along a given path. Going back to Latin and Italian it is about the via cararia – the carriage road, the path on and along which the car – carrus – chariot moves. And it is about carrying, of course.

A brief outline then, if one gets an important part of the picture – surely not the complete one:

First step, getting the weight that needs to be carried – well prepared, and well wrapped:

Influence and manipulation in Teaching Economics – Backgrounds and Examples[1]

Next step, prostitution[3] – it is not about what one says but how and where one says something.

And mind, see the progress: from the wrapped being presented, it is now about oneself, the young academic, wrapping.

Well, the end of the career? For some … the eternal wrappers, stepping higher and higher, the chariot being increasingly beautiful, the golden grids appearing as louvre – is it by accident that this is also the name of the great galleries in Paris?

For others the story ends …, well one may say Wertherian, i.e. by suicide – the way that social science goes too often[4] – actually the other side of prostitution – or its other side.

And indeed, there is some cunning of reason in the fact that this obituary on the academic freedom is published in a journal with access-by-payment-only … – Well, the Goethe, in his Faust, was clearer than Hegel with his hope for the cunning of reason, writing

and benefit to worry.

And we basically have to fail if we maintain reasoning by simple reason, accepting that we are not quantum mechanic beings but real ones.

And still, exactly therefore we have to look where and how exactly the cat moves – accepting also that it cannot be understood if we use those concepts that are hidden behind the eclipsed reason.

Sure, some leave the wrapping post and move on as rapper – against the rapists.

[3]            Frey: PUBLISHING AS PROSTITUTION? Choosing Between One’s Own Ideas and Academic Failure; http://www.econ.uzh.ch/static/wp_iew/iewwp117.pdf

Peace cannot be kept by force; it can only be achieved by understanding.
Albert Einstein

I uploaded a series of presentations given to students of economics at 中南林业科技大学班戈学院/Bangor College CSUFT in Changsha, Hunan Province in China.

The title/subject of the course these presentations introduced is “Learning Skills” – the recommended book rather stupidifying, assuming students are naive, pursuing a formalist approach to learn – and moreover reducing academic work on the approach: “Give me an answer. We will then look for the question.” It is also the way in which we ignore what is attributed to Einstein’s wisdom, namely that

We cannot solve our problems with the same thinking we used when we created them.

I tried in these lectures to raise awareness of the importance of questions, working towards an preliminary or introductory understanding of methodology.
And I tried also to make students aware of the need to counter the

The Sleep of Reason [that] Produces Monsters

The lectures used in particular arts and history (and a bit of arts history) as means to delve into different aspects of the relevant topics. – Although there are a few references immediately to my Economics course her ein China, the presentation is relevant (and can be understood) beyond this.
The videos can be found here – they also show the used slides (sorry for the audio-quality – but one gets used to it after a while).
The last lecture, given shortly after the attacks in the middle of November 2015, draws particular attention on ethical aspects and questions of responsibility.
Revised versions of the slides can be found on my researchgate site at
Dipingere – Painting –

The painter who draws merely by practice and by eye, without any reason, is like a mirror which copies every thing placed in front of it without being conscious of their existence.