Herbert Marcuse supposedly said this …  Is it another version of the words written on a postcard I recently received?

Swim to Nowhere, With No Thoughts.

So there we are worrying about big brother, watching us, algorithms rule the world and with Artificial Intelligence taking over.
Sure, there are important issues linked to these catchwords – though one seemingly tiny point is a negligence, not just as matter of language I suppose.

Just a few mails, from a Spam-poor night, and a mail-free one too. Leaving the obvious SPAM aside, to mails are perhaps even more worrying: the one at the top …, well, is there a term like SPAM-IFICATION? At least it does exist now.
* Instead of thoughtful targeting advertisement and communication in general, we accept the wikiwiki culture, leading us to just throw things out, without much thinking.
* Instead of “academic matchmaking”, I mean: bringing me/us academics in contact with relevant other academics, sites like academia, researchgate … often come to the most confusing proposals: does it really make sense to send me a link to an article on trading chemical products between China and Europe, presumably on ground of the fact that I gave a presentation on OBOR or the fact that I lived some time in China?
* hat is the premium of having access to something that is out of reach in terms of manageability? 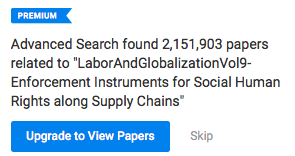 over two million papers …? What are the criteria forlinking them …, and when will I be able to read them?
Artificial Intelligence?
Indeed, I read an article some time ago, a short one in a newspaper, talking about
artificial stupidity
… which is too often more characterising.
BUT HANG ON …
Don’t we have to blame ourselves for it – not because of using FB; twitter etc.. It is probably a much more serious problem that we – living and working in academia – accept this world and work being directed by ranking; publishers’ journal sites that manipulate our reading behaviour by aggressively suggesting that “readers of this article also read … — and quoted ….” and boxing our thinking and acting.
A new trinket in the jewel case of administrative stupidity, with which the Polish government (as a Czech friend said yesterday on the phone “we are joining”) is blessing us: every academic, working in a university, has to commit her/himself to two subject areas: sociology, economics, medicine … – sure, they are very broad which may be taken as some comfort. Articles for the assessment of the academic will only be taken into account if it is in line with this self-attribution. What now if I am looking into
The Effect of Language on Economic Behavior: Evidence from Savings Rates, Health Behaviors, and Retirement Assets
as M. Keith Chen did.
What if I am looking at the question of European unemployment insurance in the light of legislation, sociological aspects and the economic development, possibly publishing the results in a journal on European history …?
There is not only direkt and outspoken censorship but also the seemingly “tame brother”,
And predictive shopping is not really new – though earlier it occurred in different forms

(Saw this the other day in Berlin: “What is missing today?” – Bakingpowder, bread, butter, eggs … onions)
Still, there is surely the need to resist …
… though there is also the time … – well, as said the other day I received a postcard, with a colour drawing, not algorithm-based but manufactured in the true sense by the sender, much appreciated by the recipient …, occasionally I allow myself resisting the need to resist, sitting there 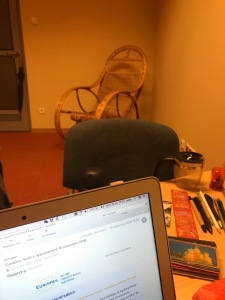 and looking at it,
Swim to Nowhere, With No Thoughts
as the few words under the drawing suggest. And making me think, energising me … to resist!